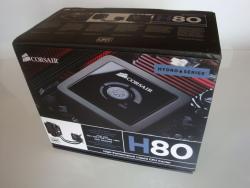 The market for all in one cooling solutions is booming. Corsair initially had a good lineup with their Asetek Hydro H50 and H70 coolers. Though they jumped on the CoolIT wagon to enter a more niche market. There was more than just the demand for good cooling. Casemodders and gamers want control over LEDs, Fans, being able to create and monitor different fan profiles,... Corsairs answer is the Link software, a rebrand of the CoolIT Maestro software. The Hydro 60 was Link ready, though it's performance was inbetween the two older Hydro models. Secondly Antec took the performance crown with their 920 cooler, so it was time to react. Let's see if Corsairs latest offering, the Hydro 80 has improved on the previous generations.

In the continuation of the previous Hydro coolers, the box art remains at a very high level. At first glance the Hydro 80 looks similar to the H70 cooler. Using a beefy radiator cooled by a push and pull dual fan solution. But there's more to it then that. Multi socket compatibility via the clever designed mounting system, similar to what we have seen on the Hydro 60 cooler. 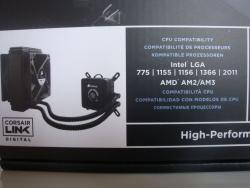 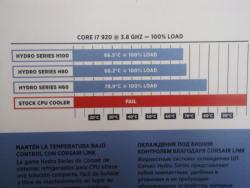 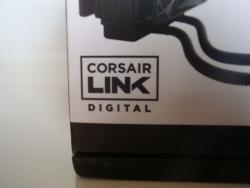 A quick comparison is illustrated on the box cover. The H80 seems ready for the task, giving the smaller H60 a run for it's money. As mentioned in the introduction Corsair imprints the Link logo on the box. Let's hope that particular soft will be available in Q3 as promised. The Link software has got a lot of insane settings that can be adjusted. From monitoring fluid temps, fan speeds, CPU temps etc... to controlling Fans, or even creating your own user profiles with LED functions that can suit your mood. Ofcourse you need to buy optional control boxes to get everything hooked up. 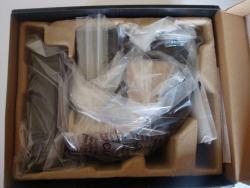 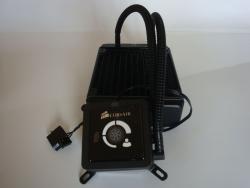 The button to control the fan speed is what directly catches your eye. Three speed settings can be selected by pressing this button. No real info is available regarding fan speeds as we can't monitor the rpms via the motherboard. On the webpage  Corsair lists  approximately fan speeds for each preset :

The fan speed setting within the preset, is controlled by the unit itself and depends on the fluid temperature inside the unit.

Once you control the Hydro unit via the digital LINK software the little man logo will light up. The tubings used are still of the Low Evaporation FEP type. Still quite rigid, but the added durability makes it all forgiveable. Luckily the swivelling mounts are still present. 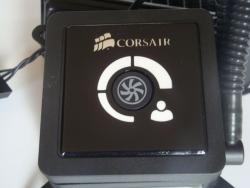 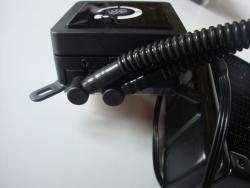 As you can see the base is well crafted, all screws are properly countersunk. Corsair learned a few lessons from the past :) Corsair/CoolIt remain loyal to the square design, while Asetek continous to believe in the circle form base. 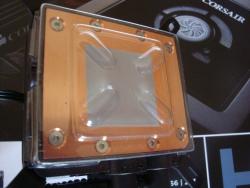 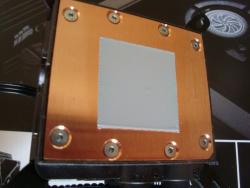 Now what is this ? We get two fanconnectors on the Hydro unit itself. This will reduce the issues we have with some motherboards that don't have proper PWM or fan adjustable speed settings. On the right is the connector for the Link software 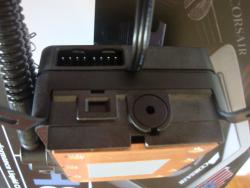 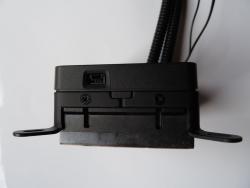 The radiator is also not the same version as the Hydro 70. Being a bit thinner and sporting a changed radiator pattern. Corsair Hydro 70 on the left, Hydro 80 on the right. The tubing lenght is also a bit longer, probably to enhance the number of mounting possibilities in different cases. 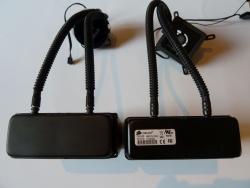 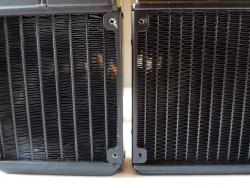 Dual fan setup, similar to the H70 for Push and Pull installation. Slightly faster version then the fans we saw on the Hydro 70 (max RPM 2600 vs 2000rpm). Suspecting much better airflow, but at the cost of some extra noise. 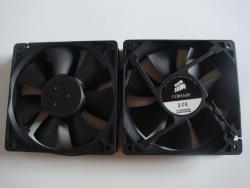 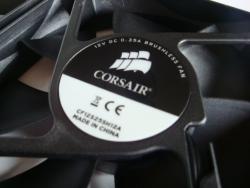