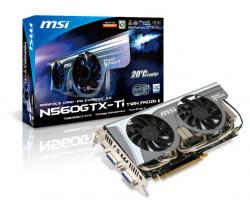 Once in a while a card pops up, that turns the head of many gamers. Not necesarrily because it's being the fastest card in games. But mostly as it's one of the cards that delivers amasing performance for the buck. The GTX560 Ti isn't a new revolutionary design though. Look more at it as a souped up GTX460 256bit 1Gb card. Without further adue time to see how the MSI performs in a few games, but more importantly to see if she can be pushed a bit more.

The GTX560 TI we are gonna introduce to you today is cooled by MSI's patented Twin Frozer II design. Not only claiming cooler temps, but also far less noise then the reference stock cooler. The GTX 560 Ti is the sucessor of the much praised GTX460 ( 256bit version of that card). Looking under the hood there doesn't seem that much new besides beefier clocks for the GPU and rams. This particular OC version of MSI's GTX 560 Ti lineup is running at 880Mhz core clock and 4200mhz for the rams. To show the differences in clocks : the aging GTX 460 nephew was running at a mere 675Mhz and 3600mhz ram speed. So quite a boost and a nice gain in performance ahead. Ofcourse you can say, heck I can clock my GTX460 up to 560 Ti speeds. Sure you can, but you will need extra voltages. On top of that, with similar voltages the GTX560 TI can soar even higher. 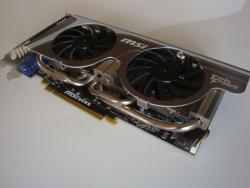 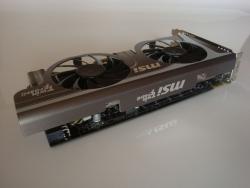 The MSI GTX 560 Ti OC in all it's glory.  The double 8 cm fans of the Twin Frozr keep everything cool and running quietly. 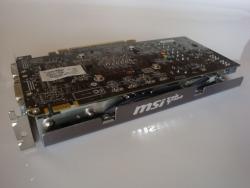 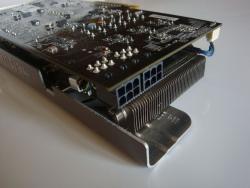 Double 6 pins PCI-E connectors to feed the card with the required juice. Popping off the cooler we immediately spot no heatsinks for the VRM area. Looking at the TIM print, it seems the contact between the Twin Frozr and GPU was pretty good. 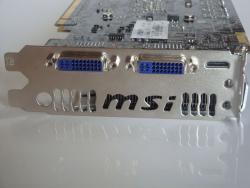 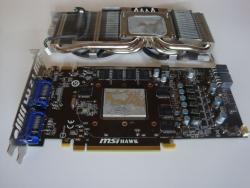 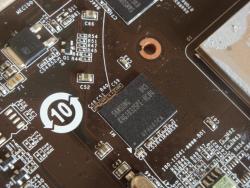 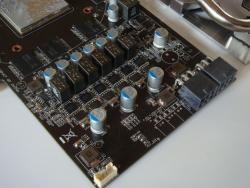 Samsung 1250Mhz ICs are used on this OC card. so we still have some overclock room from the stock 1100mhz speeds. (Reference cards run at only 1001Mhz. The VRM area sport MSI's Military class Super Ferrite Chokes and HC Caps. 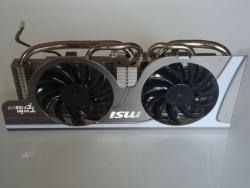 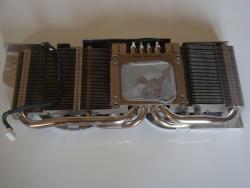 Some shots of the cooling design. And it really works : under load getting 15°C lower temps then the reference card (which also needs to cool a CPU at lower clocks ) and the noise generated by the twin 8cm coolers is remarkably quiet. 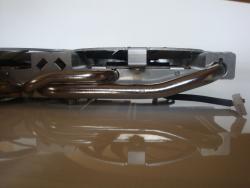 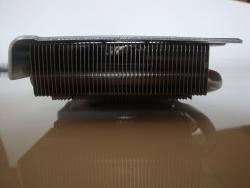