Looking for a new power supply which does not cost you an arm nor leg? Today we'll be testing two value power supplies by the hand of Coolermaster and Nexus, let's see how these two settle themselves in the lower-end PSU market after they survived all of our testing methods.

Few months back we got invited again by Coolermaster to come check some of their newest products and put them through a few tests in their testing lab. It's always cool playing with their expensive tools, but aside of this it is just nice having a chat with CM personnel as most of the time we're just replying e-mails to each other.  We quickly requested few other products which could stack up against CM's offerings, and while some products arrived pretty late (or did not arrive at all!) we saw our number participants lower to just these two... Anyway, we still have two very worthy competitors and we're quite sure more of you have already stumbled upon one of these power supplies and questioned whether or not you'd get one of these in the machine you'll be assembling next. Without further information what we actually talked about that day I give you both participants: 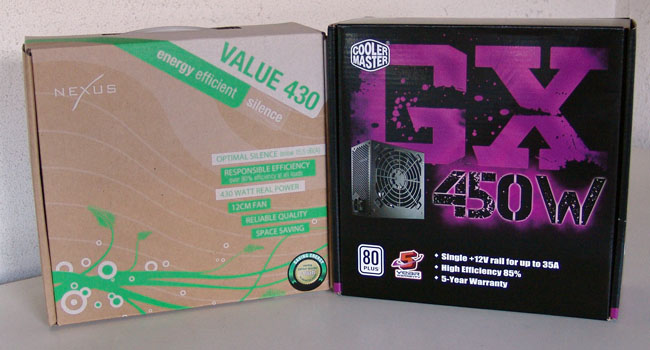 Everybody can read boxes I may presume, but for those who can't... On the left: Nexus Value 430 product box, on the right: Coolermaster GX450 product box. As you may have guessed both come very close in their power rating, respectively 430 and 450W, here are some more specs which nicely aligns both PSU's:

Don't stare too much at the absolute power ratings per rail. You may notice the large difference in 5V amperage, but if you go compare the combined 3.3V & 5V power rating you'll see both PSU's kind off ending up at the same spot. In most other specs both PSU's are very alike, digging the single rail design which has regain a lot of popularity last few years. You'll notice the GX450 being a few amps stronger on the 12V (hence the higher total output power) but is larger in dimensions too. There is also active PFC for both power supplies and a set of safety features implemented to protect the PSU from fyring up. While the set of features on the Nexus PSU may seem less, we're frankly not aware of what is and is not put inside, only those on our spec sheet are confirmed.

Before I put you through some comparison tables and charts, let's have a closer look at both of these units ->