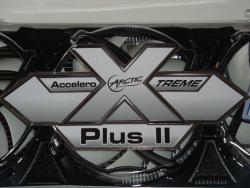 Arctic , previously known as Arctic Cooling has a long reputation in creating silent yet very powerfull cooling components. This all at an afforcable price. Most known are the versatile GPU coolers. Versatile as most models can be used on a wide range of reference PCBs. This being it ATI/AMD or Nvidia based. Today we received their brand new revised version of the Accelero Extreme Plus. Well you guessed it this slightly revamped version is called the Plus II. Victim of the day is our hot GTX480 Fermi card. Easily reaching 80°C in gaming and close to meltdown when being tortured with Furmark.

Arctic likes traditions and still packs their coolers in their blister packs. Allowing the future buyers to get a quick glance of their new cooling monster. 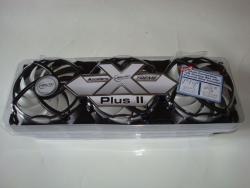 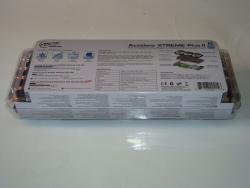 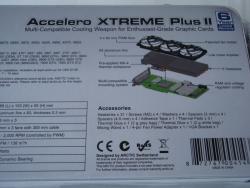 The last picture clearly listing all of the important features that should make this cooler rock.

Superior Cooling performance due to the presence of 3 x 92mm fans spinning between 900 and 2000rpm max, delivering up to 81 CFM of airflow. The 83 aluminium fins make up the radiator surface, combined with 5 x 6mm  copper heatpipes, allowing this unit to cool down 250Watts easily. The coolers base is covered with Arctic's own MX4 thermal compound.

One of the weaknesses of some previous models was the weak PWM cooling. Or in some cases the complete lack off a few more heatsinks to get the job done. This time Arctic rectified and is supplying you with a whole shabang of heatsinks for the rams and PWM area. No more adhesive thermal tape this time but a 2 compound thermal glue ; G1 The G1 glue lowers  the thermal resistance, thus enhances thermal dissipation. But it is also claimed to be easily removable. Yet if correctly applied, the heatsinks will stay in position for a long time. Who hasn't seen a heatsink drop of a card. This should be no more...

The three 92mm fans create enough airflow to cool down ya favourite gaming card, yet remain pretty silent in operation. Depending on the videocard, they can either be PWM controlled, manually speed alterations via aftermarket software alike MSI's Afterburner.  Last option is to hook up the supplied 7/12Volt splitter directly to your power supply.

This particular Accelero extreme plus II version is a master in compatibility.

Only for a few Nvidia models you need to buy an extra kit at a mere cost. So plz check the listed models on the box or the Arctic website to make sure you will have all the required heatsinks, mounting plates for your particular videocard.