If you're even half the nerd that I am you might eventually have wondered what's inside your notebook, where the irritating noise of a fan suddenly came from when watching Youtube vids, and very maybe you might have wondered why your notebook sometimes gets so hot! I'm a bit being sarcastic here as I perfectly know most of our readers indeed do understand what's going on inside the metal or plastic housing, yet still what's there to do when temps keep on rising? Notebook coolers to the rescue! Todays we'll be having a look at one of the more performant notebook coolers you'll stumble against upon your search for the perfect solution, or did we just find it four you? Read on!

It's my first time ever to write a review about notebook coolers. It's not like I haven't seen them before, it's not like a never tried one before, it's just that I haven't been paying much of attention to them before. Well basically I've got my hands dirty with reviewing other stuff and lately most of my time is devoted to with programming and education instead of messing around with computer gadgets. But err, enough of my interesting life, let's have a look at the product we'll be reviewing in this article, the Coolermaster Storm SF-19 Strike Force: 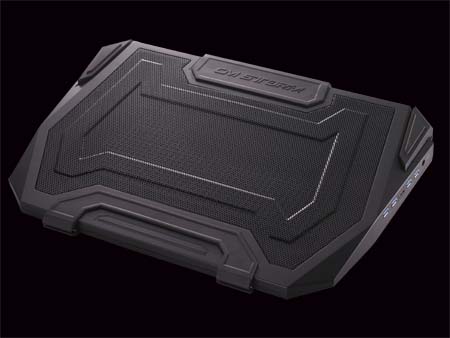 The Coolermaster Storm product range covers a whole group of pc hardware where looks matter as much as being performant. We're not talking about the tech-guy or the office engineer, I'm talking about these folks who spend some of the daily hours shooting, racing and living the virtual world inside computers: gamers! The Storm series include fancy housings, mice, mousepads, fans and now: notebook coolers.

Let's view some of its specs:

The Coolermaster SF-19 is one huge notebook cooler. It's body is this large because of the simple fact that it is designed to support portables up to 19". As with many notebook coolers the top surface is slightly pointed downwards in order to make it easier for you to control your notebook keyboard. The SF-19 is made of ABS plastic with an enhanced mesh structure in the center which allows for ventilation. On the horizontal top and bottom you'll find reinforcing anti-slip rubber, all colored in black. Underneath the black mesh you'll stumble upon two Coolermaster 140mm fans which makes sure cool air is guaranteed swirling inside your notebook. A turning wheel gives you control over the fan speed in between off and 1200~2600rpm (much alike the turning wheels mostly find for controlling sound level in portable cd/cassette/mp3 players). Furthermore you also get a few LEDS to support you in the darkest and most frightening game dungeons. One can enable/disable LED lighting with one button which will start/stop an animated LED show. A second button controls the LED color of which 7 different are selectable. Option eight loops through all available colors, an option for those who really can't make up their mind I suppose :)

Last but not least, the SF-19 also bears with it a USB3.0 hub. Inside the box you'll find a blue cable which makes the connection between your notebook and the SF-19 USB hub, after making the connection you'll be rewarded with 4 new USB3.0 ports. Unfortunately my notebook is a bit outdated so I've not been able to check out the functionality of these USB ports over the traditional USB2 features.

If you not completely understand or can't directly imagine some of the things I've just summed-up, let's bring some detailed pictures to the rescue, on next page!