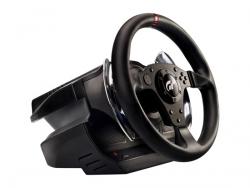 Thrustmaster, known for their high end gaming gear for flightsims, have turned their attention to steering wheels. With the endorsement of Gran Turismo 5 they have released a ~€550 wheel and pedal kit that aims to give you the best racing experience available, without going completely bankrupt. How does it stack up to a €100 wheel? Is it worth the extra cost? Time to find out.

The T500 RS from Thrustmaster has been a hot topic many racing sim forums for the last couple of months. Released earlier this year this high end wheel sets out to give the sim enthusiast the most realistic force feedback wheel for PS3 and PCs, without spending thousands of dollars. 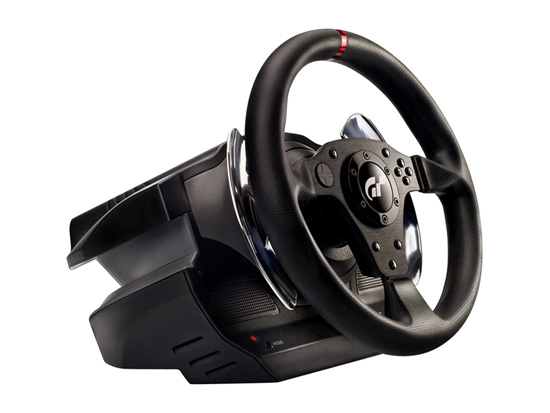 Make no mistake though, the T500 is not a bargain bin product, priced between $500-600 this product should only be on the shopping list of the most dedicated of PC and PS3 gamers. If you only play racing games occasionally this wheel is too big of an investment, if you’re into arcade racers, you’re better off with a gamepad. The Thrustmaster T500 is all about precision and immersion, something which you get when you use the wheel with the appropriate software titles.

We got a chance to test the T500 for a few weeks and tried it out on PC and PS3. On PS3 the only title currently supporting this wheel is Gran Turismo 5, while on PC the wheel can be used for almost any game title that has wheel controller support.

After flashing the latest firmware (done on the PC) we connected the T500 to a PS3 and tried out a series of cars and tracks in GT5. Previously experienced through a Logitech Driving Force Pro the new wheel was quite a step up. The T500 has no gears and is belt driven, combine this with a very strong force feedback engine and you’re near to “real car” wheel behavior. The software is where it is at, GT5 delivers with some very subtle effects as well as strong FFB when you screw up on the track. 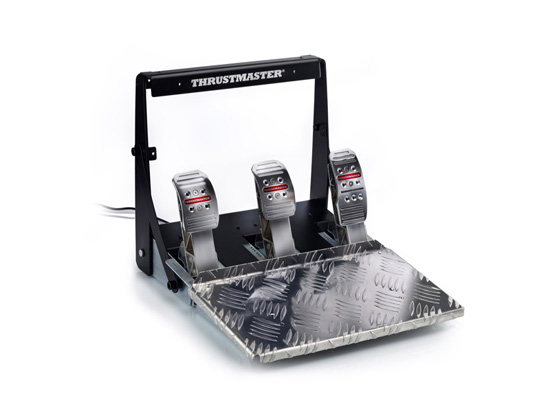 The T500 is a step up from all the mainstream steering wheels in more than one way, it’s physically bigger than the competition (wheel diameter is 30cm, same as Fanatec, but the base is huge!) comes with the largest turning circle yet (1080°) and has the strongest FFB motor running the effects. When connected to a desk you can easily let the wheel tremble the whole desk, monitors and printers inclusive when you hold on to it through rough corners and terrain. 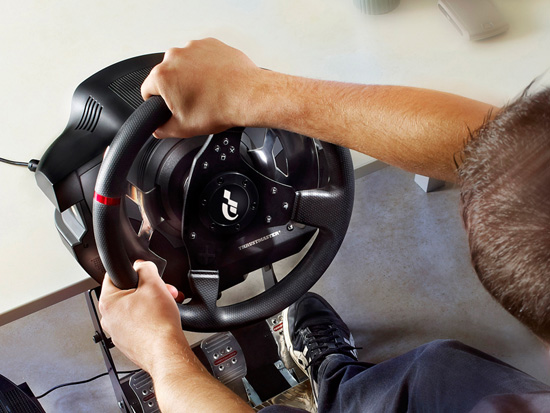 The wheel’s large diameter is a perfect match for the large collection of road cars available in PS3’s GT5 racing title, the turning circle is not adjustable in-game but does change when choosing different vehicles. You don’t get this limitation on the PC though, where you can set the lock from anywhere between 40° and 1080°.

GT5 is a “light-weight” racing sim, you can play it with a gamepad, but you need a steering wheel to get the most out of it, and while it doesn’t feature a highly advanced physics model, GT5 does a good job of striking a balance between “simulation” and “game”, allowing a bit of leeway here and there to allow you to have fun without resorting to arcade “sticking to the track” tactics. Moreover you can enable driving assists if you’re starting out with sim racing.

Overall it’s safe to say there’s no better wheel for GT5 than the Thrustmaster T500, this doesn’t mean it’s the only wheel, but if you want the best, this is it.

Great review loved it
Comment from jmke @ 2011/03/31
Quote:
night and day difference there, the momo is ancient tech

the T500, like the Fanatec high end wheels, feature belt-driven engines to transfer the force feedback which is a lot more "natural" compared to wheels that rely on gears. The G27 from Logitech is not bad, not at all, but simply outclassed by the T500.

Logitech Momo on the other hand... well, it's ancient tech, and you will definitely be able to control your virtual car better with a newer wheel