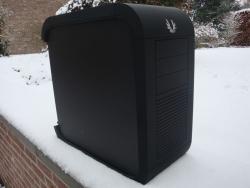 Caseking send us another mid-tower sized case to have a look at. Today's star is the Bitfenix Survivor Core case. At first glance it might look a bit dull and simplistic, but the Survivor Core case's looks can deceive. On the inside is where the real fun is at ! In the mood for something different ? Something more spacey looking ? Tired of square or rectangular angled cases ? This one is made for you then...

Bitfenix is rather new to the market. Having visited Coolermaster labs a while back for a PSU test, I heard that some of the Bitfenix founders were some of their ex engineers. Maybe they were limited in their creativity and thus started their own case company. But enough of the gossip , here's what we find abot the company and it's ideas :

For a while now, many members of the Bitfenix team have had some great ideas for products, and for one reason or another, have been unable to convince the powers that be to take a chance. Well, with Bitfenix, we finally have the ability to sidestep a bunch of red tape and bring to the market products that truly "break the mould."

Now, being different is one thing, but being useful is another. A lot of the time, companies tack on gimmicks and other useless features to their products to try to stand out. Well, we don’t want to be different just for the sake of being different. Instead, we want to make products that actually enhance the computing experience; mere flash won’t be good enough.

So how will we accomplish this? How will we be able to come up with so many ideas? Are we some sort of geniuses? Not at all. While experience can really help to bring a product to market, sometimes you really have to think “outside the box” to come up with innovative ideas. The way we will come up with products is simply to be as close to the community as possible. We want to be accessible and have plenty of channels for gamers and enthusiasts to tell us what it is they really want from their hardware. There are many ways to follow what is going on at BitFenix:

So much for the company. The Survivor case series exist in 2 flavours. The regular Survivor case and the slightly cut down Core version . The latter which we will review today. Below is a quick summarize of what Bitfenix target audience is with this case:

Ruggedized features combined with elegant styling, Survivor Core is a new paradigm in chassis design. Engineered for the mobile digital warrior, Survivor Core comes fully equipped with an innovative carrying handle that hides away when not in use, and full compatibility with extra-long graphics cards. BitFenix's SofTouch™ coating helps the system resist a few bumps on the way to the LAN party, and balanced airflow means Survivor Core remains cool and stable in the heat of battle. All of this is geared to help you dominate at your next LAN event, rather than worrying about if your hardware will survive the day. 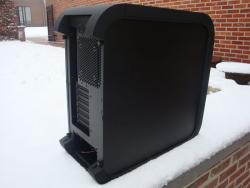 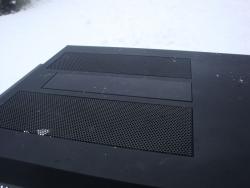 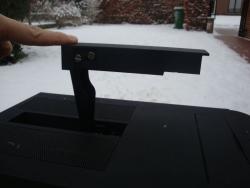 The Survivor and Core version differences : 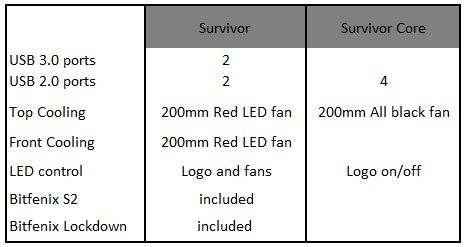 The cheaper Core version retails around 80 euros. For 20 euro's more you get an extra 200mm fan and 2 USB3.0 ports. Well worth a consideration. 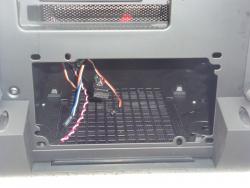 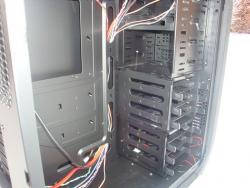 Here are the specs on the Survivor Core case : 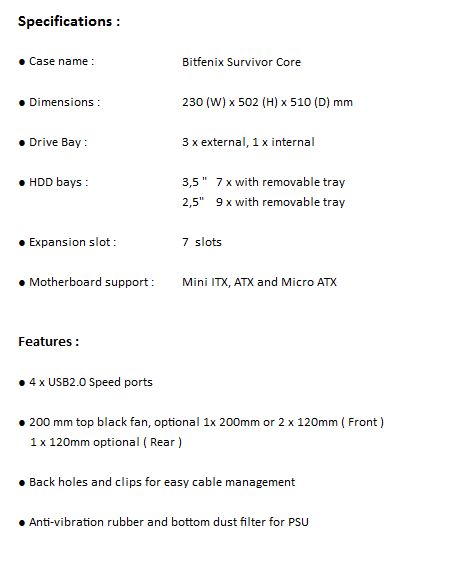 Quite an impressive ability to house massive Hard Drive Capacity. Best off all is that the total amount of Hard drives are split up in one removable bay of 3 drives and a fixed one of 4 drives.

Below is the teaser for the more expensive Survivor case ( just to let you notice again the differences between the 2 models ) :