First introduced at the CES, Intel’s new Sandy Bridge CPU architecture is here to flood the mainstream market with over 25 CPUs. Don't panic, most are foreseen for the mobile market and only 9 new models will be introduced for the desktop segment. Coinciding with this new release is also a new socket design. 1155 pins will be the new standard for Intel’s mainstream lineup. Yes you guessed it, Sandy bridge is here to replace socket 1156. Slowly but steadily Clarkdale and Lynnfield will become End Of Life and will be phased out. At the Sandy Bridge Tech conference the representatives of Intel said that the current S1366 i7 lineup (Bloomfield and Gulftown) will remain their high end platform. Time to explore Sandy Bridge...

2011 started off great with a new toy for the hardware enthusiasts. Intel's new socket 1155 aka Sandy Bridge counts not less then 29 new CPUs.  Fourteen brand new babies for the desktop platform and 15 for the mobile market. Based on the 32nm architecture Sandy Bridge's technology is targeted at being more performance, better energy efficient and this all at a lower cost. Sounds too good to be true, doesn't it ? 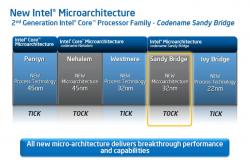 Intel's roadmap, as usual is based on their infamous Tick/Tock release plan. Sandy Bridge is here to directly replace the older S775 and Clarkdale CPU's. Later on Lynnfield and even the Nehalem architecture will be phased out. Just to give you an idea how fast it all will happen. We were at Gigabyte's Sandy Bridge launch event, there was mentioned for those ( PC builders) that still want to build socket 1156 PC's, should immediately order motherboards now. This as they can't promise any more stock in the near future ( read February ) 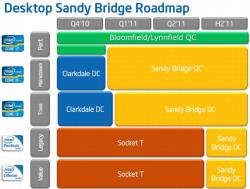 Intel still keeps the 1366 socket as High end/Enthusiast or as they call it performance platform. Now this is of course only the desktop roadmap. The Mobile roadmap is similar with a quick replacement of the Arrandale and Clarksfield lineup.

For those that want to know all the current and planned desktop models, here are their specs : 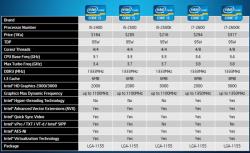 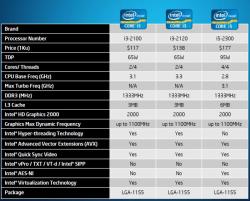 Intel chose to stick with the current i3/5 and i7 names. The newly designed logo, with the previous logo spilt open,  is clearly recognisable from the previous generation CPU's.

It's those "just a few settings" that interest me

I always want to learn from a master

Comment from Stefan Mileschin @ 2011/02/04
Quote:
Is the system stable in 3DMark 2005 CPU test too at those frequencies?
Comment from Teemto @ 2011/02/04
Nope. That's realy the max I could go.
Haven't played around with the other voltages though.
Maybe Albrecht can shed some light if this could improve stability/OC'ability?